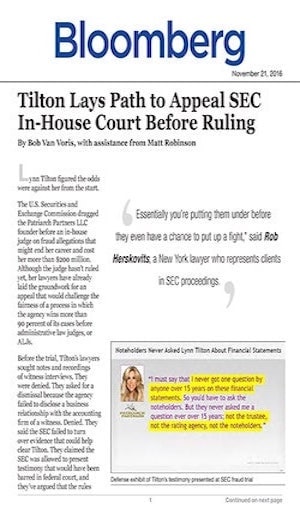 Lynn Tilton figured the odds were against her from the start.

The U.S. Securities and Exchange Commission dragged the Patriarch Partners LLC founder before an in-house judge on fraud allegations that might end her career and cost her more than $200 million. Although the judge hasn’t ruled yet, her lawyers have already laid the groundwork for an appeal that would challenge the fairness of a process in which the agency wins more than 90 percent of its cases before administrative law judges, or ALJs.

Before the trial, Tilton’s lawyers sought notes and recordings of witness interviews. They were denied. They asked for a dismissal because the agency failed to disclose a business relationship with the accounting firm of a witness. Denied. They said the SEC failed to turn over evidence that could help clear Tilton. They claimed the SEC was allowed to present testimony that would have been barred in federal court, and they’ve argued that the rules blocked them from questioning witnesses beforehand.

“The procedural bias in favor of the SEC is baked into the ALJ model,” said Jonathan Shapiro, a partner at Baker Botts LLP in San Francisco who isn’t involved in the case.

Kevin Callahan, an SEC spokesman, declined to comment on Tilton’s case or the SEC’s administrative hearings, which the agency says are fair and efficient. In July, the SEC added new rules giving defendants as long as 10 months to prepare for trial and allowing for some pretrial depositions. The SEC, which spent five years investigating Tilton, has denied her claims of agency misconduct.

Tilton is famous for buying up failing companies on the cheap in hopes of turning their fortunes around and generating profits, for herself and her investors. The SEC claims she defrauded clients by misleading them about the soundness of loans used to back the securities sold to them, and it seeks the return of more than $200 million in fees collected by Patriarch for managing those investments. Tilton says her investors gave her discretion to change loan terms or forgive missed payments on the high-interest loans in order to boost the value of the companies in her portfolio.

“Lynn Tilton’s life is on the line,” her lawyer, Randy Mastro, argued during the trial. “Her reputation. Everything she’s built over the last 15-plus years.”

Tilton, 57, spent much of the time since she was sued in March 2015 seeking unsuccessfully to force the SEC to pursue its case in federal court, where defendants have more legal protections than in agency hearings. Once the SEC case is complete, a New York-based appeals court, which has jurisdiction over Wall Street, could for the first time take a broad look at whether the agency’s in-house courts are adequate to consider disputes like hers.

She’s not alone in her battle with the regulator. In July, an SEC judge ordered Dawn Bennett and her Bennett Group Financial Services to pay more than $4 million after she refused to attend a hearing in a fraud case. Bennett is appealing. Barbara Duka, a former Standard & Poor’s executive, began trial before an SEC judge on Monday. Like Tilton, Duka lost a challenge to the process for appointing SEC judges, with the court rejecting her claim on technical grounds. And both trials were held in the Manhattan federal courthouse, but under SEC rules, applied a judge employed by the agency.

In addition to the procedural advantages enjoyed by the SEC in administrative proceedings, some lawyers say the judges are biased in favor of the agency they work for.

“There may be some unconscious bias, just from working in the same building and using the same parking lot,” said Shapiro. But he said some defendants might actually get a better result in front of SEC judges, who typically have an expertise in securities law.

Even before they make it through the SEC process, defendants may be out of business — a casualty of the bad publicity generated by an investigation and lawsuit.

“Essentially you’re putting them under before they even have a chance to put up a fight,” said Rob Herskovits, a New York lawyer who represents clients in SEC proceedings.

Tilton twice challenged the SEC process before the trial. In one lawsuit, she said the hearing officers are appointed in a way that violates the U.S. Constitution. A federal appeals court said U.S. courts can’t consider her claims until she goes through an internal SEC appeal. Tilton dropped her second challenge less than two weeks before the start of her trial, when a judge questioned whether she could hear it in light of the earlier appeals court decision.

The judge in her case, Carol Fox Foelak, will probably issue her ruling next year.

“I have a suspicion that one party or the other is going to be dissatisfied with the result and will appeal to the commission, and that will be three more years,” the judge said.