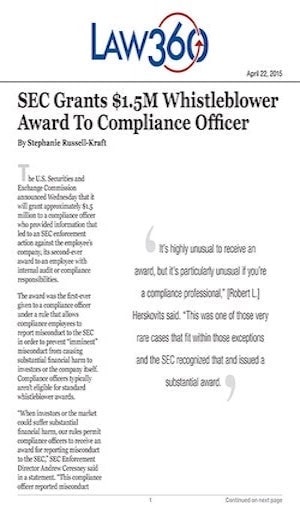 The U.S. Securities and Exchange Commission announced Wednesday that it will grant approximately $1.5 million to a compliance officer who provided information that led to an SEC enforcement action against the employee’s company, its second-ever award to an employee with internal audit or compliance responsibilities.

The award was the first-ever given to a compliance officer under a rule that allows compliance employees to report misconduct to the SEC in order to prevent “imminent” misconduct from causing substantial financial harm to investors or the company itself. Compliance officers typically aren’t eligible for standard whistleblower awards.

“When investors or the market could suffer substantial financial harm, our rules permit compliance officers to receive an award for reporting misconduct to the SEC,” SEC Enforcement Director Andrew Ceresney said in a statement. “This compliance officer reported misconduct after responsible management at the entity became aware of potentially impending harm to investors and failed to take steps to prevent it.”

Per the agency’s confidentiality rules, it did not identify the identity of the whistleblower or the enforcement action he or she helped with. Robert L. Herskovits of Herskovits PLLC, counsel for the compliance officer, also declined to comment on his or her identity but said the case had a “unique fact pattern.”

“It’s highly unusual to receive an award, but it’s particularly unusual if you’re a compliance professional,” Herskovits said. “This was one of those very rare cases that fit within those exceptions and the SEC recognized that and issued a substantial award.”

Established under the Dodd-Frank Act, the SEC’s whistleblower program is open to those who bring the agency original information leading to an enforcement with more than $1 million in sanctions. The award amount varies from 10 percent to 30 percent of the overall haul.

The SEC said the compliance officer will receive between $1.4 million and $1.6 million, but Herskovits said that amount would be “approximately $1.5 million,” which he said is “on the higher end of the eligible portion of the SEC’s recovery.”

The SEC’s whistleblower program has paid more than $50 million to 16 whistleblowers since its inception in 2011. The majority of those awards have been small, while the bulk of the money has gone to two whistleblowers, who received $14 million and more than $30 million, respectively. The first award made to a compliance professional was announced in August.

Payments to whistleblowers are made from an investor protection fund established by Congress and funded entirely through SEC sanctions of securities law violators, according to the SEC.