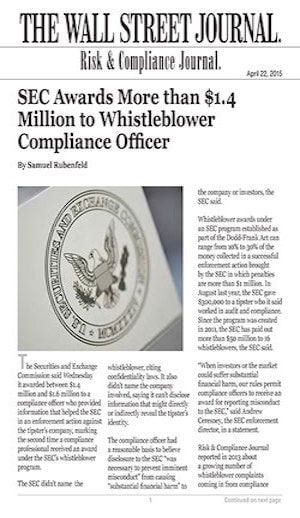 The Securities and Exchange Commission said Wednesday it awarded between $1.4 million and $1.6 million to a compliance officer who provided information that helped the SEC in an enforcement action against the tipster’s company, marking the second time a compliance professional received an award under the SEC’s whistleblower program.

The SEC didn’t name the whistleblower, citing confidentiality laws. It also didn’t name the company involved, saying it can’t disclose information that might directly or indirectly reveal the tipster’s identity.

The compliance officer had a reasonable basis to believe disclosure to the SEC “was necessary to prevent imminent misconduct” from causing “substantial financial harm” to the company or investors, the SEC said.

Whistleblower awards under an SEC program established as part of the Dodd-Frank Act can range from 10% to 30% of the money collected in a successful enforcement action brought by the SEC in which penalties are more than $1 million. In August last year, the SEC gave $300,000 to a tipster who it said worked in audit and compliance. Since the program was created in 2011, the SEC has paid out more than $50 million to 16 whistleblowers, the SEC said.

“When investors or the market could suffer substantial financial harm, our rules permit compliance officers to receive an award for reporting misconduct to the SEC,” said Andrew Ceresney, the SEC enforcement director, in a statement.

Risk & Compliance Journal reported in 2013 about a growing number of whistleblower complaints coming in from compliance staffers. However, Daniel Hurson, a lawyer who specializes in whistleblower issues, wrote in December 2014 about there being limited circumstances under which a compliance officer can receive an award.

Among the circumstances Mr. Hurson cited was the “substantial financial harm” question, saying it was designed to foil “an ongoing or nascent fraud.”

“It wants information to stop a fraud in its tracks, not necessarily to find out about an ‘old fraud’ that is no longer active,” wrote Mr. Hurson.

Mr. Hurson said Wednesday that the latest award was “welcome news” that “shows the SEC is prepared to use” the circumstances under which it’s able to issue an award to a compliance professional.

“It’s something the compliance community should take a careful look at. Most companies don’t want their compliance officers to become whistleblowers but it does send a message that, in the right case, the SEC won’t hesitate to issue an award,” said Mr. Hurson.