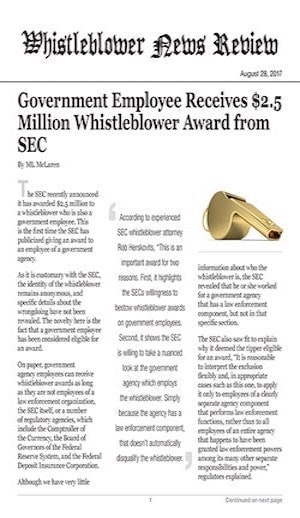 The SEC recently announced it has awarded $2.5 million to a whistleblower who is also a government employee. This is the first time the SEC has publicized giving an award to an employee of a government agency.

As it is customary with the SEC, the identity of the whistleblower remains anonymous, and specific details about the wrongdoing have not been revealed. The novelty here is the fact that a government employee has been considered eligible for an award.

On paper, government agency employees can receive whistleblower awards as long as they are not employees of a law enforcement organization, the SEC itself, or a number of regulatory agencies, which include the Comptroller of the Currency, the Board of Governors of the Federal Reserve System, and the Federal Deposit Insurance Corporation.

Although we have very little information about who the whistleblower is, the SEC revealed that he or she worked for a government agency that has a law enforcement component, but not in that specific section.

The SEC also saw fit to explain why it deemed the tipper eligible for an award, “It is reasonable to interpret the exclusion flexibly and, in appropriate cases such as this one, to apply it only to employees of a clearly separate agency component that performs law enforcement functions, rather than to all employees of an entire agency that happens to have been granted law enforcement powers among its many other separate responsibilities and power,” regulators explained.

According to experienced SEC whistleblower attorney Rob Herskovits, “This is an important award for two reasons. First, it highlights the SECs willingness to bestow whistleblower awards on government employees. Second, it shows the SEC is willing to take a nuanced look at the government agency which employs the whistleblower. Simply because the agency has a law enforcement component, that doesn’t automatically disqualify the whistleblower.”

But as both the SEC and Herskovits point out, government employees who are not directly involved in law enforcement can sometimes come forward with tips and expect an award.

For people in the financial industry, this new state of things poses new risks, as non-law enforcement government employees with access to certain documents are being encouraged to come forward if they see signs of wrongdoing. As per the SEC’s whistleblower regulations, tippers who assist in the recovery of over $1 million may receive awards of 10-30% of the total recoveries.

According to the little information provided by the SEC’s announcement, the government employee in question became “aware of certain improper conduct by a company,” and provided: “specific, timely, and credible information, helpful documents, significant ongoing assistance, and relevant testimony that accelerated the pace of the investigation.”

To prevent misunderstandings regarding the exceptions that can make government employees eligible for awards, the SEC clarified that, “this is not a situation where a claimant sought to circumvent the potential responsibilities that his or her government agency might have to investigate or otherwise take action for the misconduct.”

Exception or no exception, it is now clear that government employees can potentially obtain millions of dollars in SEC whistleblower awards. Of course, their eligibility will ultimately remain at the SEC’s discretion.