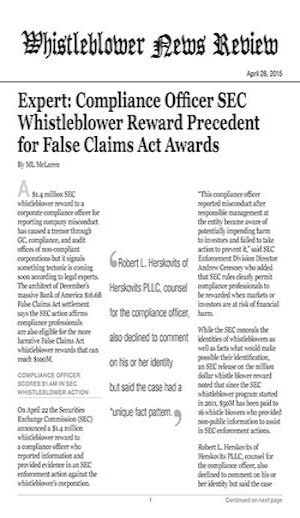 A $1.4 million SEC whistleblower reward to a corporate compliance officer for reporting company misconduct has caused a tremor through GC, compliance, and audit offices of non-compliant corporations but it signals something tectonic is coming soon according to legal experts. The architect of December’s massive Bank of America $16.6B False Claims Act settlement says the SEC action affirms compliance professionals are also eligible for the more lucrative False Claims Act whistleblower rewards that can reach $100M.

On April 22 the Securities Exchange Commission (SEC) announced a $1.4 million whistleblower reward to a compliance officer who reported information and provided evidence in an SEC enforcement action against the whistleblower’s corporation.

“This compliance officer reported misconduct after responsible management at the entity became aware of potentially impending harm to investors and failed to take action to prevent it,” said SEC Enforcement Division Director Andrew Ceresney who added that SEC rules clearly permit compliance professionals to be rewarded when markets or investors are at risk of financial harm.

While the SEC conceals the identities of whistleblowers as well as facts what would make possible their identification, an SEC release on the million dollar whistle blower reward noted that since the SEC whistleblower program started in 2011, $50M has been paid to 16 whistle blowers who provided non-public information to assist in SEC enforcement actions.

Robert L. Herskovits of Herskovits PLLC, counsel for the compliance officer, also declined to comment on his or her identity but said the case had a “unique fact pattern.”

Brian Mahany, whistleblower lawyer and lead relator (whistleblower) counsel in December’s historic Bank of America case with $140M in whistle blower award money, praises the SEC action as it puts out the welcome mat to those charged with audit and compliance responsibilities to file private whistleblower claims under the qui tam provisions of the False Claims Act.

“While there was precedent for audit and compliance professionals to report misconduct, today’s action is a powerful statement that the U.S. government will use whistleblower programs to ferret out corporate misdeeds and reward insiders who do the right thing,” said Brian Mahany.

Mahany added that the False Claims Act is an appropriate vehicle for compliance whistle blowers because it both forbids retaliation while also offering 10 to 30 percent of monies recovered and fines levied.

The procedure a reward-seeking whistleblower must follow is to engage a whistleblower lawyer to file a private lawsuit on behalf of the People of the United States. The person making the claim is called a relator. Whistleblower lawsuits are filed under seal while the Department of Justice reviews the filing and the evidence to determine if there is a case and if they will “intervene” in the action.

As now, the DOJ does not typically comment on cases still under seal and both the whistleblower attorney and the whistleblower themselves cannot comment at risk of losing the reward opportunity. The Department of Justice has issued no statement on the SEC’s action or whether or not they are currently reviewing whistle blower lawsuits involving compliance or audit professionals who are relators in the actions. Attorney Mahany replied “No comment” when asked about his own current filings.