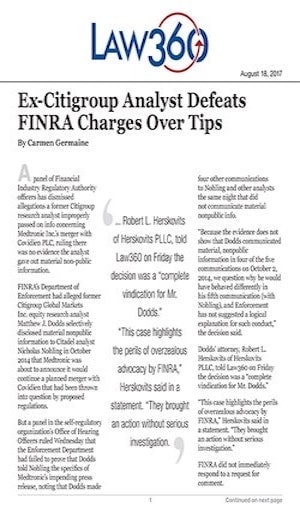 FINRA’s Department of Enforcement had alleged former Citigroup Global Markets Inc. equity research analyst Matthew J. Dodds selectively disclosed material nonpublic information to Citadel analyst Nicholas Nohling in October 2014 that Medtronic was about to announce it would continue a planned merger with Covidien that had been thrown into question by proposed regulations.

But a panel in the self-regulatory organization’s Office of Hearing Officers ruled Wednesday that the Enforcement Department had failed to prove that Dodds told Nohling the specifics of Medtronic’s impending press release, noting that Dodds made four other communications to Nohling and other analysts the same night that did not communicate material nonpublic info.

“Because the evidence does not show that Dodds communicated material, nonpublic information in four of the five communications on October 2, 2014, we question why he would have behaved differently in his fifth communication (with Nohling), and Enforcement has not suggested a logical explanation for such conduct,” the decision said.

“This case highlights the perils of overzealous advocacy by FINRA,” Herskovits said in a statement. “They brought an action without serious investigation.”

FINRA did not immediately respond to a request for comment.

FINRA’s complaint against Dodds, who voluntarily resigned from Citigroup several days after the calls, was filed in October 2015. The names of the companies and analysts were not disclosed in the original filing but were included in the panel decision.

According to the decision, Dodds had been following the Medtronic-Covidien merger since it was announced in June 2014. Although the merger, which the companies planned to structure as a tax inversion, was called into question after the U.S. Treasury announced in September that it would implement regulations discouraging inversions, Dodds continued to issue reports saying he believed the merger would go forward, the panel said.

FINRA alleged that Dodds’ main investor relations contact at Medtronic, Jeffrey Warren, told Dodds on Oct. 2 that Medtronic planned to announce the following morning that it would continue with the Citigroup merger.

Dodds then phoned several analysts at Citigroup clients, leaving messages for some telling them to get to their offices early the next morning, and telling Nohling in particular the contents of Medtronic’s planned announcement, the agency alleged.

It said Dodds called Nohling again on Oct. 4, after he was informed Citigroup’s compliance department was investigating his disclosures, and asked Nohling to delete a voicemail in which Dodds told him to “get in early tomorrow” as it was “gonna be a big day.”

In assessing the Enforcement Department’s allegations, the hearing panel noted that Dodds testified he could not remember his calls on Oct. 2, 2014, because of the adverse effects of an anti-anxiety pill he had taken earlier that day. The panel noted that the effects of the pill were backed up by Warren, Dodds’ Medtronic contact, who had seen him earlier in the day and texted his concern.

But the panel said the evidence supported its conclusion that Dodds had not shared nonpublic information. In addition to noting that Dodds had not disclosed the contents of Medtronic’s planned announcement in his other calls that night, the decision credited Warren’s testimony that he hadn’t told Dodds directly that Medtronic would reaffirm the merger.

The panel also concluded that Nohling assumed Dodds had told him Medtronic would announce the merger was continuing, because Dodds had previously said he believed the merger would go forward and Nohling shared that belief.

As for the voicemail, the panel said the evidence didn’t show Dodds was even aware of an investigation of his disclosures on Oct. 4. Nohling testified Dodds laughed after saying to delete the message, the panel said, and it was more likely that Dodds was joking.

“It simply made no sense for Dodds to seriously request that Nohling delete the voicemail message, and there is insufficient evidence to support such a finding,” the panel said.