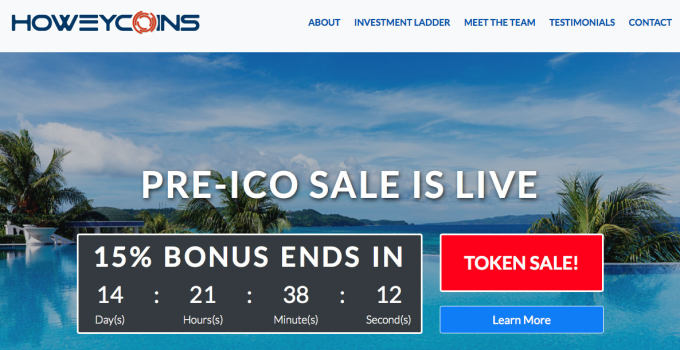 If you exchanged an official email with any SEC employee recently, you have seen the banner for Howeycoins Travel Network. And if you like to get in on a profitable deal, you probably thought, “well, if the SEC is endorsing them, these guys must be legit.” Perhaps you clicked on the banner to see what it was all about. If so, you must have been surprised at what you found.

Pre-initial coin offering deals usually promise spectacular returns, and HoweyCoins are not the exception. The attractive website for the ICO shows alluring scenes from luxury travel destinations. As you scroll down, you will quickly find that HoweyCoins will yield returns of at least 1 percent daily.

If you are not sold yet, the HoweyCoins.com site quickly boasts, “The average registered coin return over a two month period in 2017 was an amazing 72%.”

However, all these marvels await only those who dare to click on the “Buy” button NOW. A countdown clock gives you only 14 days to receive a special 15 percent bonus. How could you say no?

You will go get your credit card, your bitcoin wallet, your grandma’s golden rings, and invest everything you got. After all, HoweyCoins are “officially registered with the U.S. government… will trade on an SEC-compliant exchange… can be exchanged for cryptocurrencies and cash,” according to the site’s claims.

The U.S. government wouldn’t be in on a scam, now, would it?

Alas, the U.S. government truly is out to deceive you, but only for your own benefit. If you click on the buy button, you will be redirected to Investor.gov, a SEC website, and greeted with the following message, “If you responded to an investment offer like this, you could have been scammed – HoweyCoins are completely fake!”

In reality, HoweyCoins.com is a concoction of the SEC, which created it in an attempt to warn investors about common types of fraud in the cryptocurrency space.

As the Commission explains to users redirected from HoweyCoins.com, “Every investment carries some degree of risk, which is reflected in the rate of return you can expect to receive. High returns entail high risks, possibly including a total loss on the investments. Most fraudsters spend a lot of time trying to convince investors that extremely high returns are guaranteed.”

The SEC actually riddled the HoweyCoins offering with red flags. They wanted to make the site as phoney as possible, so that people would realize how careless they had been once they realized the ICO was fake.

On Investor.gov/howeycoins, would-be HoweyCoins investors will learn that, “many online trading platforms appear to investors as SEC-registered and regulated marketplaces when they are not… Although some of these platforms claim to use strict standards to pick only high-quality digital assets to trade, the SEC does not review these standards or the digital assets that the platforms select.”

HoweyCoins.com reproduces many features of well-known ICO schemes: it lists a non-existent group of executives (diverse and millennial-friendly, based on the posted photos) and features a number of ‘celebrity endorsements.’

Perhaps, HoweyCoins will do more to educate ICO investors than any other media campaign could, as people who click through the fake site to get a piece of the action will probably think twice before pouring their hard-earned cash into a hot ICO deal with little to offer aside from a bunch of wild claims and an elegant website.

Rob Herskovits is a New York based securities law expert with a nationwide practice. Connect with Rob