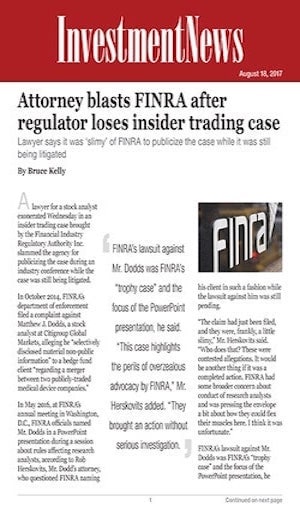 A lawyer for a stock analyst exonerated Wednesday in an insider trading case brought by the Financial Industry Regulatory Authority Inc. slammed the agency for publicizing the case during an industry conference while the case was still being litigated.

In May 2016, at FINRA’s annual meeting in Washington, D.C., FINRA officials named Mr. Dodds in a PowerPoint presentation during a session about rules affecting research analysts, according to Rob Herskovits, Mr. Dodd’s attorney, who questioned FINRA naming his client in such a fashion while the lawsuit against him was still pending.

“The claim had just been filed, and they were, frankly, a little slimy,” Mr. Herskovits said. “Who does that? These were contested allegations. It would be another thing if it was a completed action. FINRA had some broader concern about conduct of research analysts and was pressing the envelope a bit about how they could flex their muscles here. I think it was unfortunate.”

FINRA’s lawsuit against Mr. Dodds was FINRA’s “trophy case” and the focus of the PowerPoint presentation, he said. “This case highlights the perils of overzealous advocacy by FINRA,” Mr. Herskovits added. “They brought an action without serious investigation.”

“The purpose of the panel was to discuss current topics in the subject matter area, including relevant enforcement actions, all of which are made publicly available by rule,” wrote FINRA spokeswoman Michelle Ong in an email to InvestmentNews. “The case was merely included as part of a summary of disciplinary actions relevant to the topic of the panel discussion.”

FINRA alleged Mr. Dodds in early October 2014 tipped off a hedge fund client that, before the market opened the next day, medical technology company Medtronic Inc. would issue a press release reaffirming its commitment to merge with medical device and health care product company Covidien, according to the hearing panel decision. FINRA also alleged that Mr. Dodds asked a hedge fund executive to delete a voicemail message that he had left.

A sticking point for the FINRA hearing panel was why Mr. Dodds would tip off only one client and not others, according to the decision.

“We find that Dodds may have hinted in those four communications that he believed a Medtronic press release was imminent, and he may have conveyed that he believed Medtronic would reaffirm its commitment to merge with Covidien,” according to the decision. “Because the evidence does not show that Dodds communicated material, non-public information in four of the five communications on October 2, 2014, we question why he would have behaved differently in his fifth communication, [with the hedge fund client], and FINRA Enforcement has not suggested a logical explanation for such conduct.”

The panel also found that FINRA enforcement had “insufficient evidence” to support the allegation of the erased voicemail.